In this laboratory, the main focus of study is spintronics. In spintronics, one simultaneously utilizes two attributes of the electron, its electric charge and its magnetic moment or “spin”, which have been utilized separately. We aim to elucidate physical phenomena based on the interplay of charge and spin in order to realize spintronics technologies for highly-functional and ultralow-power electronics and information processing/communication. We are mainly working on the following four topics of spintronics researches. 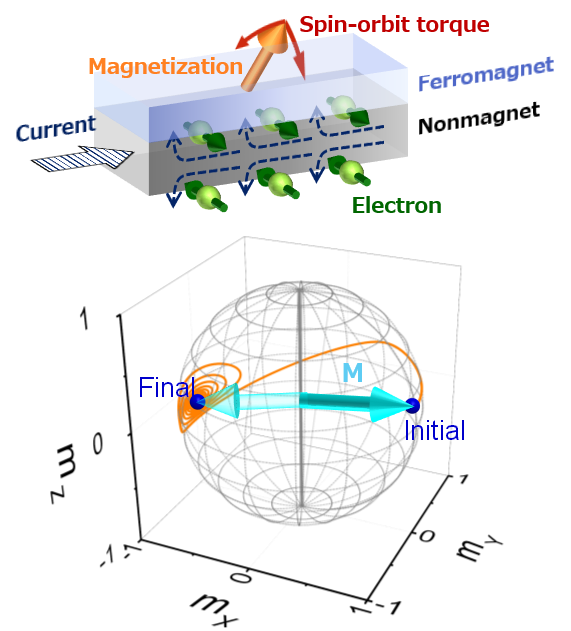 Even a nanoscale magnet has a north and a south pole, and the line connecting the poles defines the direction of the magnetization. Usually the magnetization can only be re-oriented by applying external magnetic fields, so electrical control of polarity of nano-magnets is one of the biggest areas of interest in spintronics research. Various schemes have been proposed and demonstrated since around 2000. Recently, a spin-orbit torque (SOT)-induced magnetization switching (right figure), which utilizes spin-orbit interactions in broken space inversion systems, has been emerged as an efficient scheme to efficiently control magnetization, and has been investigated extensively.

In our laboratory, for the sake of nonvolatile magnetic memory applications, we study magnetization dynamics under SOT, underlying mechanism of SOT generation, and material systems that give rise to large SOT. Recently, we developed a new scheme of SOT switching that is suitable for high-speed operation and achieved magnetization switching by 0.5-nanosecond-long and low-current-density. 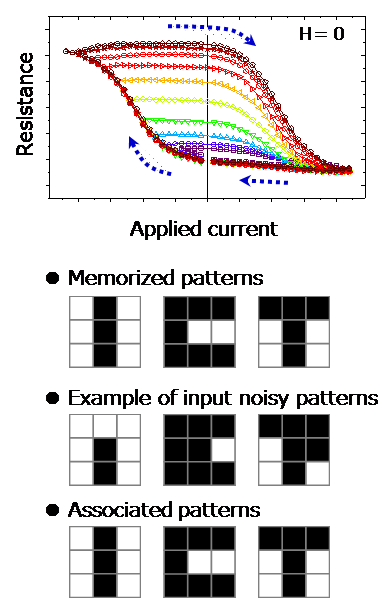 Applications of current spintronics researches include read head of hard-disk drives, nonvolatile memory for digital integrated circuits, and so on. However, spintronics can offer many other opportunities. Recently, for example, neuromorphic computing and quantum computing have attracted great attentions as a route to go beyond the existing digital computing. We are also working on materials and devices-based research of spintronics for the applications to such fields.

For example, we found that analog-like information storage is possible by varying the current magnitude applied into an antiferromagnet/ferromagnet heterostructure, as shown in the upper-right figure. This property resembles to that of synapses, which play roles of memorization and learning in our brain. We paid attention to this fact, and developed an artificial neural network containing the heterostructure as the artificial synapse, under a collaborative research with other laboratory in the Research Institute of Electrical Communication, Tohoku University. Using the developed system, we showed a proof-of-concept demonstration of associative memory operation using a mathematical model of information processing of the human brains (lower-right figure). 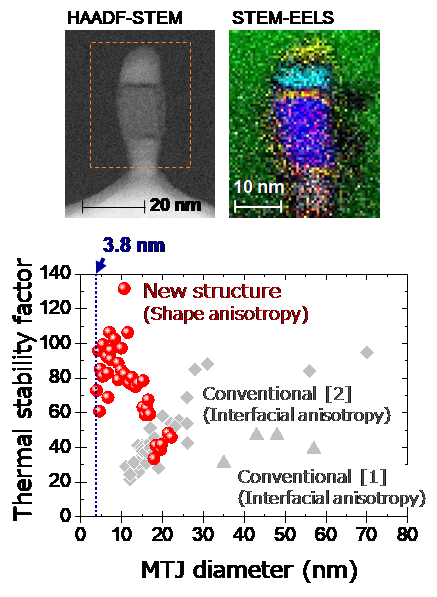 Semiconductor integrated circuits, sustaining present information communication societies, utilize semiconductor-based working memories such as SRAM and DRAMs. These memories are now facing tough challenges; for example, physical scaling limit and standby-power consumption. Utilization of spintronics has been expected to be a promising approach to overcome these challenges, and its representative example, STT-MRAM (Spin-Transfer Torque Magnetoresistive Random Access Memory) is about to go into volume production by mega-fab companies. A perpendicular-easy-axis CoFeB/MgO magnetic tunnel junction developed by Ohno laboratory of the Research Institute of Electrical Communication, Tohoku University is a decisive breakthrough in realizing the STT-MRAM.

We are also working on material and device technologies and relating physics for the enhancement of performance and integration in future. Recent achievements include world-smallest magnetic tunnel junction devices down to the diameter of 3.8 nm, that possesses high thermal stability factor, i.e., non-volatility (right figure).

Deep understanding of both underlying physical mechanisms and materials exhibiting prominent properties are indispensable to realize highly-functional and high-performance spintronics devices. Since the spintronics is a relatively young research field, interesting physical phenomena and materials have been reported almost every year.

To pave a way towards new application areas of spintronics, this laboratory is also working on fundamental researches of unexplored spintronics physics and materials, including clarification of high-frequency magnetization dynamics by means of ferromagnetic resonance, understanding the static and dynamic nature of nanoscale magnetic structures and their underlying interactions, modulation of magnetic properties by electric fields through the variation in electronic structure, and understanding the interactions of conduction electron spins and localized magnetic moments in ferromagnets, antiferromagnets, and their heterostructures.